I heard the peep-peep-peep- and there they were.....a clutch of newborn chicks with their mother hen.  My long barn has many nooks and crannies where free ranging hens can hide their eggs from me.  It doesn't matter to them what time of year they hatch chicks.  Surprisingly, many do survive.  I put tubs on top of the rabbit cages and some of them lay eggs on a daily basis, even at the darkest time of the year when a dedicated room full of spoiled rotten chickens with regular meals aren't laying eggs at all.  I don't feed the free rangers.  They live off all the spilled grains from the rabbits, sheep and pigs.  There is always plenty of food around for them.    I love these mother hens.  If all mothers were as protective and devoted as these little chickens the world would be a better place. 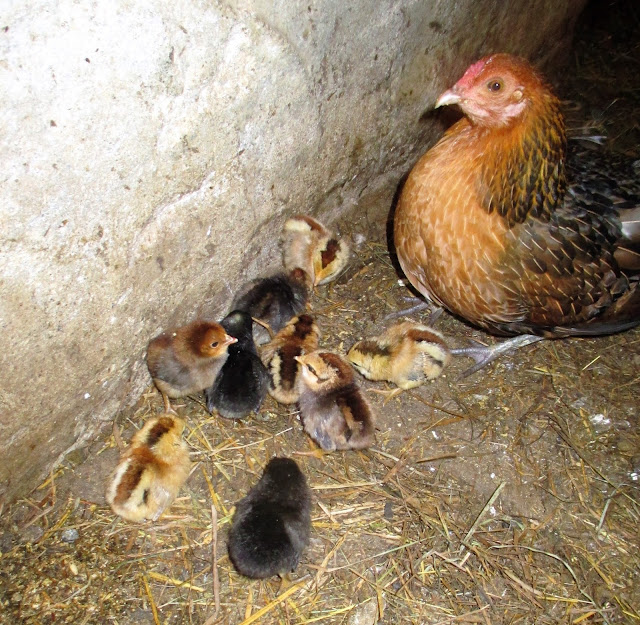 What better way to come back to my journal than with a birth announcement?  Yes, it's a surprise but maybe not so much of a surprise when I recall how late I pulled the rams out of the flock.  There must have been one night when a hint of coolness triggered the hormones in the ewes and there it goes.  I pulled Luna from the flock when I became concerned about her weight.  My sheep get all the hay they can eat, along with green grass late into the fall, but other factors can come into play.  I pulled another aged ewe, Magnolia, out with her, along with Ole' Momma and her pal, both old ladies.  Last year Ole Mama surprised me with a set of ram twins, Castor and Pollux, named after the staI rs.   When Magnolia grew round with a swollen udder I knew birth was imminent.  I was forking hay yesterday in the mow and heard that distinctive "Mommy chatter."  Sheep talk their lambs out of the womb.  Lambs know their mother's voices before they are born and can distinguish mom's call in a crowded flock.  I ran downstairs and sure enough it was happening. 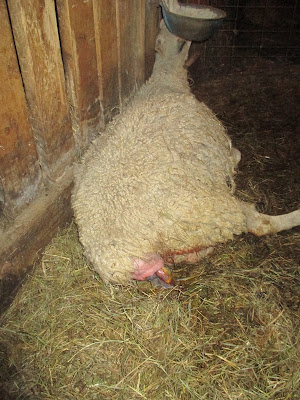 Thank goodness I was hear as the lamb was stuck at the pelvic bones with the shoulder joints preventing them from sliding through.   I could see the little front feet on either side of the nose, peeking out from her behind.  When I was sure the labor was not progressing, I washed up.  I cupped my hand around the lambs head with my right hand and pulled one leg forward.  The one leg extension unhooked the shoulder and allowed the lamb to come through.  It took a bit of pulling on my part and pushing on her part, but soon the long yellow torpedo slid out.  She began licking the ram lamb and I knew we were going to be okay....or so I thought. 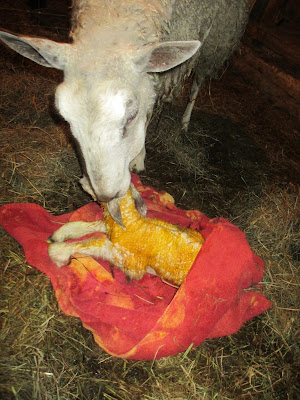 Magnolia has plenty of milk but is reluctant to let her lamb nurse.  I've experienced this situation in difficult births when mom realizes the baby had something to do with the trauma she suffered. 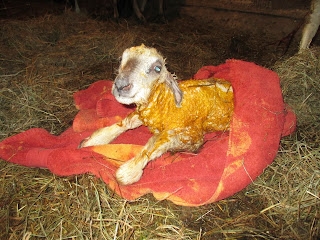 She loves her boy and carries on when I pick him up but no amount of coaxing will make her feed him.  I held her as best I could - she is a big sheep - and squeezed out enough colostrum to give him a good start last night and again today.  I'm hoping she calms down and changed her mind.  I love this little Winter Solstice/Christmas lamb.  I can safely predict more lambs in the next couple of weeks.  Isn't it nice I'll be home to receive them.  The farm is all about new life, and new life in the new year is just lovely. 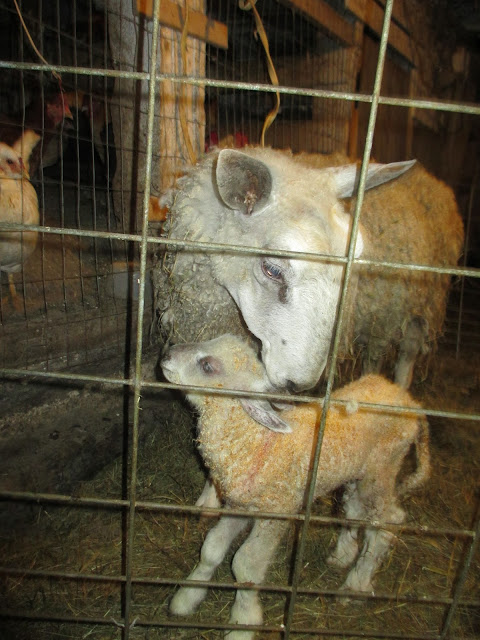